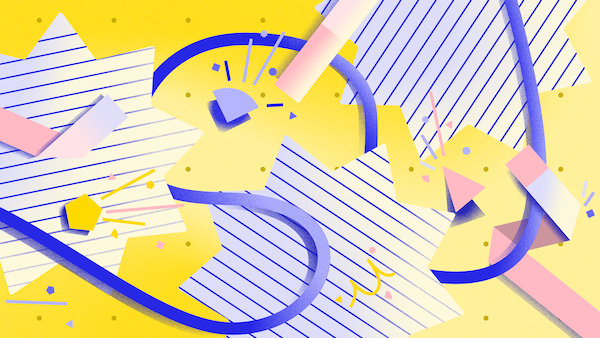 How to Get (And Stay!) Inspired as a Designer

Do you think good designers pull ideas out of nowhere? That could be further from the truth. Designers are always observing, thinking, perceiving and listening. Whether you design products or graphics, cultivating a creative practice is key to sharpening your skills and getting really good.

Anyone who builds creative things needs to be inspired— from the entrepreneur building businesses and jobs to a writer building a world, a story or an idea. Designers too.

The term “inspiration” itself feels a bit fluffy, doesn’t it? As if anyone has the time to sit around waiting for inspiration when there are always so many things that need to get done.

But when designing things is your work, inspiration means much more than a momentary flash of genius. It’s an “unconscious burst of creativity”, a culmination and additive process of all the things you put into your brain whether you realize it or not. They swirl around to make up your unique perspective. It’s your perspective brought to life by the practice and application of your skills that makes you a designer.

Let’s take this hypothetical thought exercise: “If you were the best in the world at what you do, how would you show up?”

Would you sit around waiting for divine intervention, or would you build a habit to continuously and consistently be inspired?

When I say that, I think a lot about what design is. It’s meant to be functional and aesthetically pleasing. But now, so many things tick off all these boxes quite easily and it’s not really enough anymore. I can get a slick passable design for $5. Now, we’re all looking for a little something extra. We’re looking for something fresh, exciting, new, something that catches our attention and makes us pay attention. Design is closer than ever tied to business needs in a way that’s tangible and measurable, all thanks to data.

Good design may not be shocking, brand new or innovative, but it can’t be a copycat. That’s not design. That’s just monkey see, monkey do. That can be left to AI, machines and $5 mills.

Leave it up to chance and you’re missing the whole meta-point of design.

So with that, here are some ideas and ideas for how to get and stay inspired as a designer:

Stalk the people you admire

You can learn so much more not just by looking at the work they produce but by looking under the hood to see how they got there, what they were looking at, what kind of work/jobs/experiences they had. That’s why I love reading biographies and watching documentaries, and sometimes even just falling into a LinkedIn rabbithole.

Look to the designers you admire and then look more broadly than that too. For example, I like to review the work of people who’ve just done really amazing and/or significant things, even if they’re not doing the things I want to do.

“Design teaches us not to make assumptions.”

Design may be built on principles, but don’t forget that design is about people. People are changing, growing, and they have opinions—and that’s part of what makes design fun, and challenging too. (If you don’t want to design for people, maybe consider being an artist instead.)

You don’t need a psychology degree but I don’t think it’s any surprise that a lot of UX designers have degrees in psychology or cognitive science.

Even outside of UX design, having empathy is important. Because the success of a design can now be quantified on the web, it’s much more obvious when a design doesn’t work: you don’t get the clicks or people aren’t liking the message on Instagram. You have to cultivate your understanding of people.

Learn to ask questions and be curious. You’ll find that inspiration doesn’t just come from what you actively seek, but from the willingness to be open to what other people tell and show you, whether directly or not. This could be as obvious as the mentorship of a fellow designer or it could be beneath the surface, such as observing what your friends consider good and bad design, what catches their attention and what doesn’t. (And more importantly, it means pushing yourself to observe and empathize with people who aren’t your friends, too.)

Curiosity might just be the secret ingredient to intelligence.

Start to look at a lot of things, start to understand why you like them, go deep and go light. Ask questions and learn about as much as you can. Learn to code so you understand how design comes to life on the internet, learn art history so you understand context and how things came to be, learn about different cultures so you have the capability to think outside the box of your own backyard.

Inspiration is very much visual because we’re visual creatures, but it’s not solely visual. We’re not just eyeballs with no brains. Inspiration is also a feeling, a mood, a value, a smell, a sound, a person, an idea. So think about that too.

I recently designed a website and when it came to the visual look and feel, I wanted it to evoke the mood of Bladerunner. Before that, I made something that I wanted to evoke the nostalgia of when I first discovered the internet in 1999. Why? Because I was getting sick of the sameness I was seeing when everyone is following internet “best practices”. So I went back to a time when there were no rules, and everything was kind of ugly. (Turns out, I wasn’t the only one thinking that but I digress.)

One of the most fun parts of design is to take something you find really cool, even just a mood or an idea, and putting it in a new context. Anything can be visual; inspiration is often the mood, idea or principle that gets you there.

I think for most people, it’s not easy to try to do the work at the same time that you’re trying to cultivate your creativity. They don’t necessarily live well in the same space together. That’s why it’s so important to schedule the things that you know matter. Be proactive about the direction you want your life, work and art to take.

This could be at whatever interval works for you. It could be on a per-project basis. For example, when I work on personal projects, I now give myself several months to not actively work on my project, and just research. But, this could also be daily—for example, getting off Instagram for 30 minutes and reading instead.

What feeds you creatively? Make time, space and energy for it.

Culturally significant visual and graphic designers always have their identifiable perspective. You can tell a Paula Scher design from a Massimo Vignelli design. Good designers know what their point of view is, and they hone in on it. They’re not trying to be all things to all people, unless maybe they’re designing for a mass market brand, but even then, mass market isn’t actually everyone.

This requires a certain level of self-awareness and to develop that, you need to understand who you are and who you’re designing for.

…Then make lots of things

The difference between good design and great design is output and audience, not necessarily skill. Skill is only the foundation that gets you from amateur to good.

Doing lots of work, putting it out there, and having an audience that loves it, that’s what makes a great designer. A designer who solves a problem with no one to appreciate it, well, I don’t know what that is. Something like the philosophical thought experiment: “If a tree falls in a forest and no one is around to hear it, does it make a sound?”

So never be afraid to make lots of things, practice a lot, then ask for feedback. Don’t shy away from it and remember to strive for excellence, not perfection.

Are you ready to start designing? The best thing about design is you never stop learning. The nature of design is that you’re always working on new solutions. As long as we have problems, we’ll need designers to solve them.

Last words: to get good, you need to just do it. You need to design things. Lots of things. You need to practice lots and work on projects. You can’t just think like a designer to be a designer. You have to make things to make it.

This article is a chapter in our free pdf guide: First Steps to Learning to Design. Download it now and get a bonus chapter featuring our favorite free tools and websites for design!