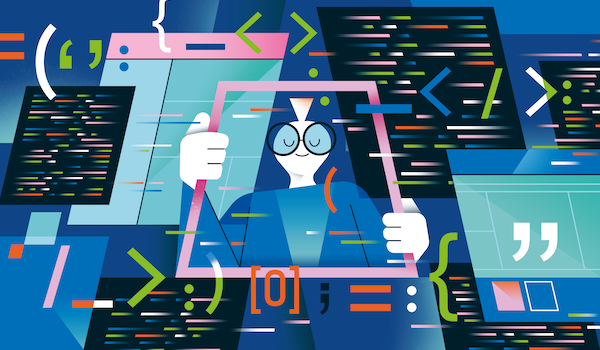 Tales of Web 1.0: How Studying Net Art from the 90s Can Inform Design Today

On the first day of one of my interaction design classes, I asked my students to describe their first online memories. The most common responses were having a parent share funny videos on YouTube, seeing an older relative on Facebook, or exploring Club Penguin.

When I posed this question, I was surprised by the responses. My first memories of being online include obsessively looking at LeonardoDicaprio.com, building expressive personal websites on Geocities and Expages, and refreshing HampsterDance.com to listen to the jingle repeatedly. At 29, I’m only about a decade older than my students. Still, I witnessed the tail end of web 1.0 and saw the internet before it became today’s highly commercialized expansive digital landscape, through the last windows of the wild worldwide web.

The most significant difference between my students' memories of being online and my own is that their reference sites are built on large companies' systems with many user insights.

Earlier websites were different. In her 2005 article “A Vernacular Web,” the artist Olia Lialina described the early internet as “bright, rich, personal, slow and under construction. It was a web of sudden connections and personal links. Pages were built on the edge of tomorrow, full of hope for a faster connection and a more powerful computer. […] It was a web of amateurs soon to be washed away by dot.com ambitions, professional authoring tools and guidelines designed by usability experts.”

Today, websites like YouTube and Facebook have a uniform system and structure that houses content. These websites allow users to upload their own videos, images, statuses and share it, without writing a single line of code. On the one hand, this is positive because it allows more people to publish and experiment with technology; the internet becomes accessible, and reduces the skillset needed to put yourself online. On the other hand, these platforms limit the knowledge of what's going on in the background. Doing so reduces awareness of how the technology works at large, making it seem mysterious and complicated.

It can provide the illusion that only highly trained engineers working at enormous corporations can define the online world, rather than everyday users.

Perhaps because of this, many students start interaction design classes with a sense of worry and dread. Some see programming as a skill they’re inherently bad at, and web design as separate from traditional graphic design. Other students join the class with a preconceived idea of what web design looks like and that there is a correct way of doing so based on the platforms they’ve used first hand. Confronting these notions is important in helping students develop relationships with tools and a design practice of their own based on their own experiences, interests, and opinions. To help start this conversation, contextualizing the web's history is a helpful place to start, and studying early net art is a sharp entry point.

Net art can be a cultural artifact. They can be:

Designer and educator Kevin Cadena likes to introduce net art with a general new media description and questions this definition throughout the semester, expanding it from websites, memes, and even Cecilia Vicuña's textiles. Cadena, who teaches both high school and undergraduate-aged students at the Parsons Scholars Program and The School for Visual Arts, realized the importance of highlighting net art in an educational context while working with public high school students at The Center for Urban Pedagogy in 2018.

Cadena and the students at CUP worked together on a website called The Bronx is Blossoming, which looked closely at Bronx residents’ access to nature and their relationship with the Sheridan Expressway. Before Cadena’s involvement, the students developed stop motion animations and images that explored this topic. Cadena worked with them to assemble their content into a website. His teaching process highlighted a web design's basic steps – sharing examples, showing ways of documenting work online, setting up a sitemap, wireframes, and designing early site mockups. The result is a memorable, eye-catching and homemade-looking interactive collage of photography, graphics, and custom typography. The final website was designed by Cadena and informed by all the previous iterations and discussions. When it was presented to the students, they said they had never seen anything like this and that it was the “most unique looking thing they’d ever seen,” Cadena shared with me on a Zoom call.

“If you talk to someone who’s a little older, they say the site has a very big Web 1.0, early nineties web influence. And it does. But to the students, it's just like they've never even known that this was a thing,” he said.

Cadena values showing net art in the classroom because it breaks down the notion that there is only one existing design process. “[Net art] showcases change, showcases history, and it helps [the students] understand that they can start to build their own relationships to the technology,” he said. Cadena continues to bring in this historical component to all classes he teaches, even software-specific courses that aren’t necessarily related.

Using a historical context in more technical skill-based classes is a great way to connect the dots between developing an idea and learning to execute it. Sometimes students feel overwhelmed by the sheer amount of possibilities within any software that they can lose sight of an entry point.

Olia Lialina’s 1996 piece, “My Boyfriend Came Back from the War” is a helpful example of a clear story, consistent graphic language, and achievable technical skillset. The piece presents an emotional and cinematic narrative about a young woman who reunites with her partner from a conflict. The project is housed on a website and styled with a black background and white serif typographic links and black and white imagery. It's connected by a series of hyperlinks that transition from various moments in the story. Many students express surprise in the depth of storytelling on this website, despite its static design. This is helpful because students begin to feel confident in their own technical skillsets when they see that this project is made up of a set of hyperlinks and images. The storytelling does not require special effects or a flashy design.

In the mid-90s, the web had more technical limitations than it does now – for example, typography was limited to web-safe fonts and there were fewer controls for layouts. For early design students, working within restraints can help them focus on the poetry of their ideas and allow them to communicate their thoughts in a straightforward way. Olia Lialina’s project, as well as others from the time period, prove to them that this is a possibility.

From a technical perspective alone, viewing early net artworks and learning to create a simple web page using the same language forces students to work within their own skillset limits. In terms of typography, HTML has an inherit system to it with its hierarchy of headlines: H1 to H6. Once students explore these systems, they understand the relationships in their content, empowering them to build their own systems outside of the webpages.

To Cadena’s point, understanding these systems is helpful to recognizing systems at large, systems that exist in other design software, like Adobe InDesign, for example, and beyond. Once you learn how to make a simple webpage, you can see the relationship to designing a poster or a book – they both incorporate a set of elements that need to work together and be tied together structurally and visually. The early net artists provide foundational examples of these skillsets.

In her 2004 paper, Net.art and Net.pedagogy: Introducing Internet Art to the Digital Art Curriculum, professor Alison Colman describes a study where she worked with high school students on an introductory digital arts class. She theorized that exposing students to net art would help them think critically about the internet. Colman shared four works of Internet art: Amy Alexander's The Recycled Multicultural Recycler (1996), Kevin and Jennifer McCoy's Maintenance Web (1999), and Olia Lialina's My Boyfriend Came Back from the War (1997) and asked students to evaluate their reactions. She was interested in their general impressions and how it related to websites they’ve seen or used.

In the study’s findings, she describes that “the students' general reactions to and opinions of Internet art evolved from a strong initial dislike to acceptance.” At first, many of the students rejected the websites, staring blankly at the screen and not knowing how to interact with it. Others described a preference for traditional art forms, “dismissing Internet art as too ‘different.’” She writes that the students were more receptive after hearing the projects' context and seeing more examples. Colman also asked students how the websites' design adds to the concept, using hyperlinks and navigation, graphic elements and typography to build a discussion about intentionality.

In my Fall 2020 Art of the Web class, I tried Colman’s activity with different artists and had similar results, despite the sixteen year age gap. Many students described the projects as “difficult to understand” and “dated.” One project we looked at was Group Z’s Love (1996). While some students described the typography as "very basic/bare minimum," one student described the difference between this project and more contemporary websites: "It's not like most commercial websites that want to help people finish a task. This website is more about exploration and experience." This became a jumping off point to the website's goals and how those were realized through the design language, as well as what the goal of a website can be. Regardless of their initial feelings of the website, we could pull back and discuss the artist’s goals and question the student’s own biases.

Questioning biases is helpful in both thinking critically about design and also exploring how net art can be a tool for social change or commentary. This can lend itself to looking at more contemporary examples of new media art. For example, the 2017 piece "Pics or It Didn't Happen: Images Banned From Instagram" from Arvida Bystroem, Molly Soda, and Chris Kraus is an archive of images censored from Instagram, many focusing on the female body. Highlighting this project can inspire conversations about modern censorship and biases in the social platforms students use regularly.

In 2020, writer Malcolm-Aimé Musoni created an online magazine called "Blacks Rule" which is about the lived experience of being Black by and for the Black community. The publication is distributed as a downloadable PDF and was created during the pandemic and after the untimely death of George Floyd. Both "Pics or it Didn't Happen" and "Blacks Rule" use the internet to develop content and contribute to current conversations outside of design. With this common thread to the early net artists, students can question how they define art and how design can be used outside of a professional environment.

By seeing the connections between net art, design, and self-expression, students can see opportunities to contribute to the world using the internet as an entry point and design as their methodology.

The sheer concept that we can access many of the early net artworks projects online is incredible. This alone allows students to feel like architects excavating primary source documents that they wouldn’t have found otherwise, and has inspired discussions around preservation in my own classes. The goal? To contextualize design out in the world and beyond the computer screen.

While net art itself can seem "old" to the students, it offers entry points to graphic design and visual culture at large, one hyperlink at a time.

Nika Simovich Fisher is a multi-disciplinary graphic designer, educator, and writer based in New York. She is currently a partner at Labud, a design and development studio she founded in 2018 and teaching at Parsons School of Design and the University of Pennsylvania.